My DPhil research was on the neural coding of sensory information by the auditory system.

(I completed my DPhil (oxford term for PhD) in May 2021.) During my doctoral study, I investigated responses of auditory cortical neurons in the brain to study computations underlying the processing of natural sound stimuli in the auditory pathway.

Using state-of-the-art NeuroPixel probe electrodes, I recorded the activity of a large number of auditory neurons simultaneously in anaesthetised ferrets in an in vivo setting. We created a large dataset from these neural recordings and used this dataset for computational modelling of the auditory cortex.

The sound stimuli I used were isolated natural sounds, such as speech, animal calls, and environmental sounds, as well as sound mixtures of the same sounds. There are a couple of reasons for using natural sounds - one, they evoke strong response in large number of cortical neurons, two, cortex is optimized to represent the statistics of natural sounds. 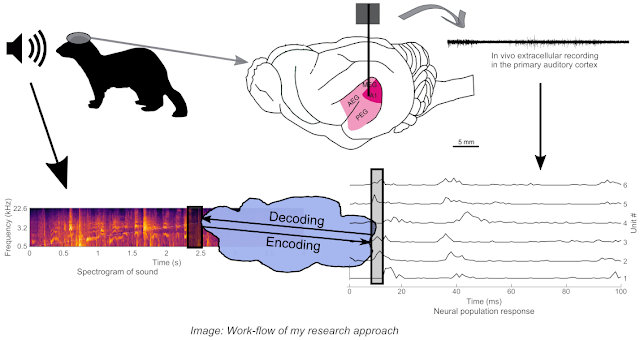 Research questions I am interested in: What makes neurons fire in the auditory cortex and when they fire what do they represent?

Investigating a range of encoding models, from the phenomenological to the mechanistic, my overarching finding was that complex mechanisms in neural circuits can have simple algorithmic expressions. I have published these results as a research article in Proceedings of the National Academy of Sciences (PNAS). https://www.pnas.org/content/117/45/28442

My work on the encoding models of auditory cortex has also lead to the development of an alternative model for temporal receptive fields of neurons. The model combines the idea of dynamical systems and neural networks to show how a network of interacting neurons with very short temporal latency can form receptive fields with long temporal dependence. This work has been published as a research article in PLOS Computational Biology. https://doi.org/10.1371/journal.pcbi.1006618


Using the decoding approach, I asked if a population of neurons in the auditory cortex holds information about the expectation of future stimuli as well as encoding the past history of the stimuli. I decoded from a very small window of neural activity (~10 ms), the spectrogram of stimulus past and future relative to that window. Our data suggest that the auditory cortex might have features that are optimized to predict the future inputs. We have presented these results in multiple conferences and I have given a conference talk on this. A research article is under preparation to publish this work.